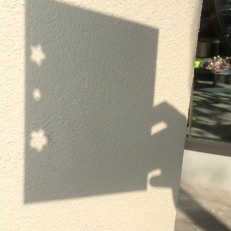 The Festival of Lights Parade got us thinking about light, and so we decided to do some explorations from a classic exploratorium experience, the Light Walk. We punched some star-shaped and round holes into card stock, and then looked at the shadows they made outside. When we held the card close to its shadow, the shadows looked just like the holes. But when we pulled the card back, the shadows dissolved into circles instead of stars. This is pretty cool, but I think it’s even more surprising when I criss-cross my fingers, and see that the shadows are perfect circles, unlike the more trapezoidal, irregular openings that are actually between my fingers. 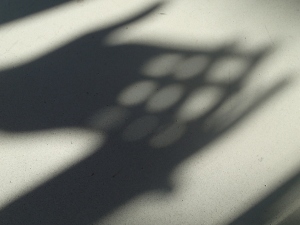 So what’s going on? While at first this might seem like a complex scientific principle at work, it turns out to be evidence of a very simple concept: light travels in straight lines. The little circles appearing on the sidewalk are images of the sun. The sun is actually completely filling our field of view with tons of overlapping, tiny, circular images. The pinhole only allows one image to pass through, so you can see the circle in the shadow. If the sun was shaped like an F, then we would see an image of an F. If you don’t believe me (which you shouldn’t without investigating for yourself), then try out the same experiment with an incandescent light bulb- the image you see should be the shape of the filament, instead of a circle. Let me know what happens when you try it!